Twenty-eight Indianola ninth and tenth grade GEAR UP students recently toured the Outsiders House Museum in Tulsa, OK. Students started the tour by stepping into the house where the movie was playing in the main room. Tour guide Donnie Rich shared stories about how the actors came back and signed their names on the wall. He then gave a tour of the house where the movie was filmed. They viewed never before seen photos and movie artifacts. Some of the artifacts were of outfits from the movie, as well as the director’s chair. Rich shared stories about scenes from the

Bokoshe ninth and tenth-grade Eastern Oklahoma State College GEAR UP students recently toured the Tulsa Air and Space Museum and Planetarium in Tulsa, Ok. During the guided tour, GEAR UP students learned about the history of the MD-80 aircraft, Grumman-14A Tomcat, and the jet engines. After the guided tour, the students visited the Planetarium, where they watched a 45-minute video learning about stars, planets, and black holes in space. After the Planetarium show, they had lunch at CiCi’s Pizza. The field trip was sponsored by Eastern Oklahoma State College GEAR UP. Eastern received a $17 million federal GEAR UP grant 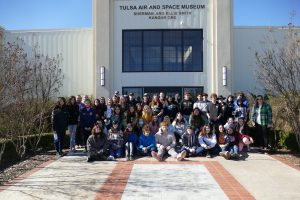 Fifty-one Canadian freshmen and sophomore GEAR UP students recently toured the Tulsa Air and Space Museum and Planetarium. GEAR UP students received a guided tour of the museum. The guides shared stories of their time in the aviation industry as they explained the aerospace industry through the utilization of an array of visual aids spanning over 12 years. Students toured through the American Airlines MD-80 and competed to land a hot air balloon in one of the museum’s simulators. Last on the tour was the James E. Bertelsmeyer Planetarium. The Planetarium show explored the journey to the furthest reaches of 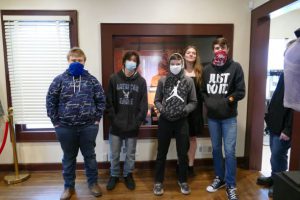 Fifteen Haileyville ninth and tenth-grade GEAR UP students recently toured The Outsiders House Museum in Tulsa, OK. The tour began with guide Donnie Rich telling the students about the book’s author S. E. Hinton, who currently lives in the Tulsa area. Hinton wrote The Outsiders book her sophomore year in high school and received a D on the writing assignment. The book was then published in her junior year of high school. Students explored the house where the movie was filmed in 1983. They viewed never before seen photos and movie artifacts. Some of the artifacts were of outfits from 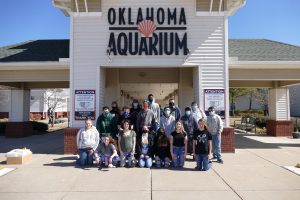 18 Hartshorne freshman and sophomore GEAR UP students recently toured the Oklahoma Aquarium in Jenks, Oklahoma. GEAR UP students started the day with the Director of Education and Research Ann Money with a behind-the-scenes tour of the aquarium. She pointed out that while Oklahoma may be distant from the nearest ocean, our ecosystems are connected by the Arkansas River.  She emphasized that when we care for our local environment, we care for the world’s environment. Money guided students through the small and large animal quarantine facilities where biologists care for animals before placing them on exhibit. The aquarium is home